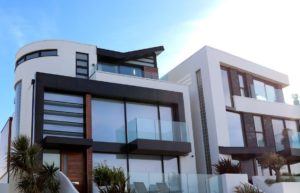 Are you designing or renovating a structure that needs contemporary glass design? Choose the appropriate glass features for your building by understanding the basic categories of modern architecture. Here are explanations of the three main styles of modern buildings and a few examples of window types that suit each architectural style.

An architect informally known as Le Corbusier is considered one of the people who inspired the international modern architectural style. In Le Corbusier’s “Five Points of a New Architecture,” he described his idea of the ultimate building design features. His designs favored simple structures built on stanchions with open ground-floor levels.

Le Corbusier also was a fan of strip windows to give buildings the appearance of floating. Asymmetrical arrangements of windows are appropriate in an international modern building, as well.

Ludwig Mies van der Rohe is the architect and designer who helped usher in the international modern and the Miesian modern styles of architecture. Mies’ designs often reduce structures to their most essential elements, and Mies’ believed that homes should blend in with their natural surroundings as much as possible.

Glass and window styles that fit a Mesian Modern structure style include the following:

Windows and glass in a Miesian modern structure should blur the lines between the inside and the outside of the building. Window glass may wrap around corners and can be arranged in long bands. Miesian modern style homes may lack too much privacy for urban settings but work well in remote or private settings due to the open arrangement and transparency of the structures.

A Miesian modern home or other structure can accommodate more privacy by choosing glass windows that can turn opaque or be shaded automatically. Place privacy-accommodating windows only in bedroom and bath areas to maintain the Miesian modern style in the remainder of a structure and ensure some privacy.

Industrial modern buildings are constructed of a variety of materials and are not as transparent as international or Miesian modern buildings. Metal, wood, and concrete may be mixed together on exterior and interior surfaces.

Windows often have black frames that contrast with wood and concrete elements in industrial modern structures. However, industrial modern exterior window frames can be painted in a wide array of colors to add interest to a structure without detracting from the architectural style.

Windows that suit the industrial modern structure include the following:

Choose modern, energy-efficient windows for your modern and contemporary structure in Greater Cincinnati by contacting Arch Design Window and Door today. We provide all types of architectural glass for structures throughout Southwest Ohio and the Fort Mitchell, Kentucky area.